Mondays are not something I try to celebrate normally. But this Monday is exciting because I’m telling you about my trip to New York City! Yes, the one from December 2013. I promise food! booze! adventure! and touristy things! I also promise not to drag this first leg of my trip out any longer!

I’ve been missing New York pretty hard lately. There’s just something about getting lost in the bustling city that makes all of the obnoxious thoughts preoccupying your mind float away. Since I definitely don’t get hustle nor bustle in Napa, I’m forced to relive my New York City adventures through photos of my trip and my travel journal, which I’m so, so thankful I stuck to writing in. Especially since I’ve been putting off writing about my trip for over a year. It helped to remind me of the little details of our trip that my nearly 30 year old brain had already forgotten.

While I’ve been to New York twice before, my parents hadn’t ever been until our trip! I wanted to take them to a few of my favorite places, some which also happen to be New York icons. Over the course of 3-ish days, we explored the known, got lost in the unknown and then ate and drank our way through New York City. At the end of our adventure that wonderful few days in December 2013, my parents felt like they had a pretty great overview of the Big Apple. Here’s what our visit looked like:

Having taken a red-eye from SFO, we arrived in NYC at a ridiculously early hour. Our AirBnB host Josephine had recommended a taxi service to get us from the airport to our Chinatown apartment for only $35. We were so happy she had because there was no way we could navigate in our sleep deprived state.

Sandwiched between an Asian fish market and pharmacy, we struggled to find the front door to our building. As a man was leaving the building, we jumped inside and stared in awe at the ridiculous number of stairs we needed to ascend. But, ascend we did. Hauling our (carry-on) luggage up those 99 stairs–yes, ninety. nine. stairs.– almost killed me.

We briefly explored our new digs, which didn’t take long because it was an incredibly cliche tiny 2-bedroom New York apartment above a fish market, but it was actually cute. Afterward, we promptly proceeded to pass out for a few hours. Red-eye flights are no joke.

Rested and ready for adventure, we hit the streets. It was cold, snowy, and icy. I really don’t think anything could have prepared me for how many layers of clothing I’d need to wear while in New York. I also have to commend New Yorkers for their grit. I don’t know how you do this for an entire season every year. It was so cold on our walk down Mulberry Street, that we decided to stop into McNally Jackson Books (my favorite cafe, as detailed here) to warm up with mochas.

Once we’d returned to room temperature, we decided to keep on with the adventure pointing our sights on the legendary Katz’s Deli (read about that adventure in this post). We left completely full and satisfied, already scheming on how we could get another bowl  of Katz’s matzo ball soup into our packed schedule. On our way back to the apartment, we stopped by a quirky grocery store called Met Food for some breakfast fixings. Back at the apartment, we vegged and planned out our adventure for the next day.

A little planning and a bottle of wine later, my dad and I were hitting our second wind. We decided to explore the neighborhood’s bars and happened upon Toby’s Public House. With a cozy tavern feel, we felt right at home and found a spot at the bar. After a few pints (they have 24 on tap!), we bundled back up and headed home to bed.

We made breakfast at our apartment and decided we were going to brave the New York City subway system. **I feel like I need a disclaimer to mention I’m directionally challenged. Also, Napa doesn’t have subways, so I never really learned how to use them. And just for good measure, I’ll mention that it took me 2 1/2 months to figure out the metro system while living in Prague.** We were heading to Finnerty’s Irish Pub— a bar known by San Francisco/Bay Area sports fans as a sister city bar– to watch the 49ers/Buccs game and took the subway up to somewhere near 51st and 2nd Ave. because my directions told me to. Note that this is nowhere near Finnerty’s.

Our 37 block walk down 2nd Ave. gave us lots of time to reflect on how important directions can be and get over how mad we were. Also, we saw lots of cool architecture, various embassies, interesting people and sights we probably wouldn’t have noticed if driving, like views of the East River and the United Nations Building. We finally made it to Finnerty’s and were thrilled to see a sea of Bay Area lovers clothed in 49ers colors watching the 49ers. A few pitchers shared amongst new friends, brand new (and awesome) San Francisco Giants shirts and a win against the Buccs made our sour moods disappear. And we got home on the right subway, win! 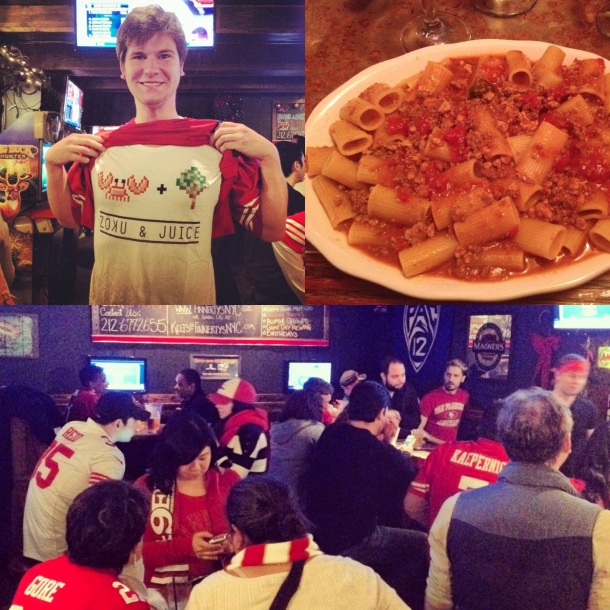 My Uncle John recommended we try out La Mela, a favorite of his, since we were staying so close to Little Italy. It seemed like something out of Seinfeld with its walls covered in autographed photos of celebrities. The pasta was good and portions were huge, so we decided to take our leftovers back to our apartment and up the 99 stairs. At this point, we were waiting for our buns to turn to actual steel.

Wanting to see the holiday decorations at night, we hopped on the subway in the general direction of Times Square for some touristy exploring. We wandered around Rockefeller Center, saw the light show at Saks, before actually stumbling upon the brightly lit wonder that is Times Square (you can read all about that here). Knowing our schedule started early the next day, we headed back home. But not without getting lost on the subway again. If we’re keeping score, NYC subway: 2, Nat + Co.: 1 (it only got worse)

Mimosas started off our third day in New York–we were on holiday, after all. Since it was supposed to be the only clear day on our trip, we wandered down to Battery Park to take the ferry over for the tours of the Statue of Liberty and Ellis Island (more on that in this post here).

After hopping off our ferry and meandering back through Battery Park, we stopped at a Starbucks to warm up and headed over to the 9/11 Memorial (read about that incredible experience here). Emotionally drained, cold, hungry and just plain tired, we walked across the street to the BLT Bar inside the W Hotel. Such a great find! We imbibed on delicious cocktails and gorged ourselves on popovers, burgers and fries– it was absolute heaven.

Tentative plans to meet up with The Wino from the Lazy Travelers and Erin from The World Wanderer fell through. I was as bummed as they were that we couldn’t make it work out. But I was also thoroughly exhausted, full and a bit tipsy (not a great state to be in when meeting people for the first time). While heading home, we hoped to even the score with the subway system and failed twice before succeeding. You can’t win them all.

Our flight from NYC to London was a mid-afternoon flight, which allowed us to do a few more things we’d wanted to try while in New York. First, we wanted to go back to McNally Jackson. I’m telling you, that hot chocolate! Then we needed New York cheesecake, so we walked to Ferrara’s in Little Italy. Holy moly the cheesecake and pastries we tried were delicious!

Since it was snowy, we knew we wanted to get to the airport earlier than necessary. Thank goodness we did! My passport is older so it doesn’t have a chip. This also meant that I couldn’t print out my boarding pass and had to wait in line for an agent to print mine out. We then waiting in line for security for an hour and a half. Side note, I don’t get how inefficient and unorganized large airports are about this! Luckily, we still had plenty of time before our flight across the pond. This allowed me enough time to sneak in one more thing I’d wanted to try while on the east coast: Shake Shack! 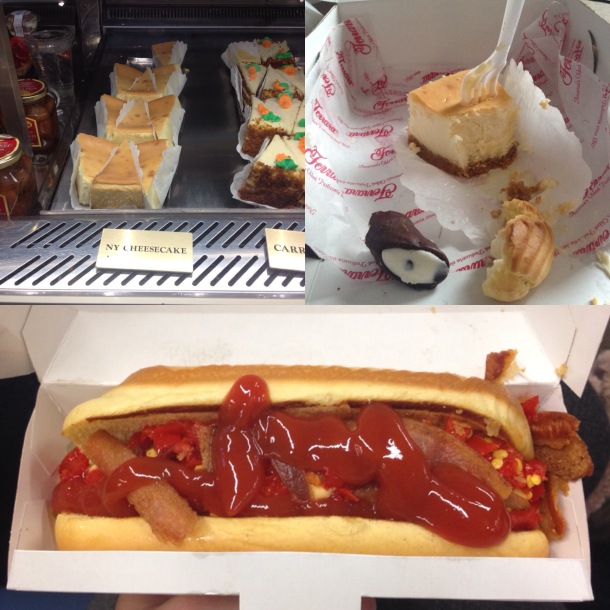 As is usually the case with traveling, I never have enough time to do every single thing I want to. Things come up like inclimate weather (hi, Polar Vortex), schedules, jetlag, getting lost.. I’m particularly bummed about missing out on meeting up with friends, eating my favorite dish at Zlata Praha (like I did here), walking across the Brooklyn Bridge, eating way too many New York bagels, taking in a Broadway show (it’s been 10+ years!), taking a tour of 30 Rock, attending a taping of a show (SNL, Live! with Kelly and Michael, etc.) and many other cliche/touristy/fun NYC things. I suppose this means I’ll have to make another trip out east to knock a few of these things off my list and get my New York fix.

Get ready New York, I’ll be coming for you soon!

About In Natalie's Shoes

I’m a twenty-something food fanatic. By day, I’m working for a non-profit, by night I’m dreaming of becoming a domestic goddess, creating adorable crafts to gift and engineering delicious home cooked meals for the fabulous dinner parties I’ll one day throw. I love to travel, locally, regionally… heck, even internationally, I don’t discriminate too much when it comes to a new destination. I am a little obsessed with taking photos of the food I eat, whether I make it or pay to eat it. It is my firm belief that a girl can never have enough purses or too many shoes. I plan to fill this lovely little blog with my adventures in food, travel, and craftiness. I hope you enjoy!
View all posts by In Natalie's Shoes »
← Friday Five
Friday Five →